Ever wonder what that arm exercise machine Anderson Silva was using at UFC 112? That’s the Burn Machine Speed Bag, and you can read the review right here.

I was first made aware of the Burn Machine Speed Bag when I saw this mechanism that Anderson Silva was operating on the Countdown to UFC 112. I noticed a fair amount of threads on Sherdog with queries regarding the contraption and after a bit of research, I discovered that it’s called the “Speed Bag” made by a company called Burn Machine.

I know what you’re thinking, it’s just another overpriced piece of exercise equipment with an infomercial. Well, we don’t like generalizing here at MMAGearGuide.net and we gave the Burn Machine Speed Bag a thorough evaluation. Though I will tell you now, I would recommend that you try a unit out if you have access to one. With this contraption, experiencing is believing.

Ordering: Customer service is top-notch and will go the extra mile in literally answering any query you may have about their products either through phone or email. The product was also shipped in record time, and they also offer tracking of your package so you can follow it every step of the way.

The Burn Machine Professional Speed Bag weighs 12lbs (5kg) though it does seem heavier than a 5kg plate. Think about it as comparing a 5kg kettlebell with a 5kg dumbbell. The kettlebell FEELS heavier, though they’re exactly the same weight.

Workout: I had it dead-set in my mind that working out with this thing was going to be a walk in the park but it sure was the exact opposite. If I were to summarize this portion to one sentence, all I would say is: It’s not called a Burn Machine for nothing. The apparatus does live up to its name.

I’ve lifted conventional weights for a long time, have gone through kettlebell training, weight circuits along with my MMA training and I can tell you right now that working out with the Burn Machine Speed Bag is an experience in itself. And no, working out with the Speed Bag isn’t an end-all workout but it is one hell of a great supplement to any routine, whatever your goals are.

The Burn Machine Speed Bag primarily works out your shoulders, biceps, triceps and trapezius muscles. It also helps with forearm strength/endurance, grip strength, hand-eye coordination, and footwork. It really depends on how you use it. If I was asked to categorize this piece into a free-weight or a machine, I would say it’s right smack in the middle.

The great thing about this thing is its versitility — you can choose how to use it according to your goals. For the first few days of having the Burn Machine Speed Bag, I naturally started a bit slow; focusing mainly on arm endurance. All the time hitting the bag, pads and sparring, I thought I had already developed a fair amount of arm endurance but working out with the Burn Machine goes beyond that.

For one, the most basic BMSB movements emulate working out with a speedbag and uppercuts, moves that directly translate into the standup aspect of mixed-martial arts.  It also teaches you not to hold your breath if you still haven’t mastered the art of doing so. Due to its design, you can either use it to do isolation movements and/or to do semi-compound exercises. For instance, you can either use it for a purely aerobic workout which will assist in improving your static arm and shoulder endurance, or you can incorporate it with your HIIT/tabata style workouts to work on explosiveness. The possibilities ARE endless due to the versitility of this product.

The Speed Bag is a semi-portable unit so I do have the option to bring it to the gym with me and add it to my circuit. Though, I do primarily use these for home workouts. Another thing that I love about the Burn Machine Speed Bag is the fact that it takes up virtually no space. I do live in a relatively small flat in the UK and as some of you may know, space is a big issue when it comes to having large equipment and for something of this size and for the amount of work that one can do with it, this thing is definitely a winner.

Overall: I do without a doubt recommend this to anyone. The price at $149 is a bit expensive to a couple of people but I would have to say that it is worth every penny. Again, I’m not stating that this thing is an end-all for your MMA workouts but The Burn Machine Speed Bag is a great supplement to any established, or aspiring mixed-martial artist. 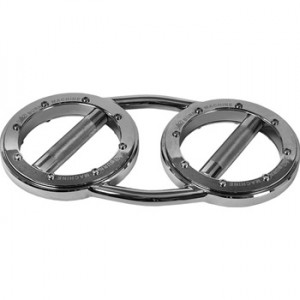