First Impressions: I purchased the Heat Gear a few weeks before Christmas. Size M short sleeves. With the Cold Gear I got lucky. I found it sitting in my closet from years, I mean years ago. I only wore the Cold Gear for a month until I bought the Heat Gear. The Cold Gear is supposed to keep body heat in, so you would think it would not be good for MMA, while the Heat Gear is to keep your body cool. When I received the Heat Gear it seemed quite a bit thinner than the Cold Gear. And of course the quality was excellent, no major frills or loose threads anywhere.

Fit: I ordered a M rashy. The only other rashguard I can compare it to is the Medium Manto Rio Camo. The Under Armour is a lot shorter than the Manto, about 2″ shorter. It’s also a lot tighter fitting than the Manto as well, not that this is a good or bad thing, it’s really personal preference. I myself like it a little looser. It seems to ride up a little bit more than the Manto, due to it’s length. Other than that it fits great! The sleeves are pretty damn short, I was afraid of my pit hair was showing, but it’s nothing to worry about, they just seem really short. On the other hand, the Cold Gear sleeves are super tight, while everything else is the same.

Construction: It’s Under Armour, the construction is great. Like I said, no loose threads or anything. They tend to keep the logos relatively small, which is a good thing for the fact that if they begin to peel or crack, it would not ruin the look of the rashy. It’s been over 2 months and there is a little amount of wear. Somehow most of it is on the shoulders, weird. Must be the rolling. There aren’t any tears or holes, the fabric is just getting worn in the shoulders.

Stand up: I have not worn a rashguard that I have not liked. The Under Armour is not an exception. When training stand up, I have absolutely no problems except the fact that it rides up. What I mean by rides up is that the rashguard comes above my shorts, then I have to take a second to pull it back down. It does not affect performance or anything, it’s just annoying is all. When throwing strikes, it does not restrict your movement whatsoever, same deal even with the long sleeves on the Cold Gear. It is very thin and breathable so I stay very cool in it, I don’t tend to sweat a whole lot in general, but I can stay in it for hours and stay dry. I did not feel like the Heat Gear kept me any cooler than the Cold Gear, but then again the Cold Gear is years old.

Ground: On the ground it’s a bit different, the riding up becomes an even bigger problem. The rashguard will nearly reach my belly button. I like my rashguard to stay in place. The rashy is tight enough that when I do nogi BJJ, people’s feet don’t get caught on it. The material used is very slick, so nogi is very nice. Althogh the material is thin, I do not tend to get mat burns all that often. Other than that, performance wise it is the same as stand up.

Cons:
Price
To tight for my liking
Rides up
Some wear already

Overall: I would give this rashguard a 3.5/5. Under Armour makes quality products, but they are expensive. When you can get them on sale they are worth it, otherwise they tend to be pretty expensive. I advise you to get a Heat Gear over the Cold Gear only because the Cold Gear has a faux turtle neck. 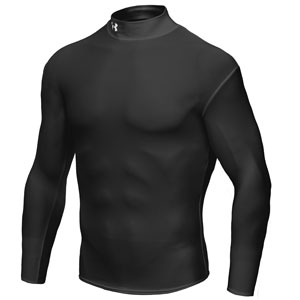