Built to the same specs as the official UFC Fight Glove with fully adjustable wrist wrap for maximum support. Constructed from leather to be durable yet supple and ideal for training. This is also the  only glove tested and approved by the UFC® and required in the Octagon for all Ultimate Fighting Championship events.

When I pulled these out of the bag, the initial thought was that it was a bit bulkier than the gloves that were made by Ouano, which used to be the ones that made gloves for the UFC. The gloves are a pretty or maybe that’s just classical conditioning working. It was also a bit surreal that I was holding the exact same glove that I’m so used to seeing on my television screen. And as expected, it’s made out of genuine leather.

Regarding fitting, it was a bit too tight at first but I guess it just needed some breaking in. A couple of sessions on the mitts for about 2 weeks was pretty much enough to do the trick. I was a bit worried that I ordered a smaller glove but turns out that it stretches out after a few uses and wraps will eventually be able to be put in there. I wouldn’t suggest 180″ wraps though, probably a 120″ would suffice.

The wrist support on this thing has satisfied me as it goes around my wrist about one and a half times if that makes sense. As for the gloves itself, just a reminder this is a 4oz MMA glove which is primarily used for competition so I wouldn’t do any hard sparring with these on unless your sparring partners are fans of getting their faces jacked up. But I would say that they provide more than enough protection for the wearer. As I said earlier in the review, it has a lot of padding around the knuckle area.

Overall it’s a pretty well-rounded glove. It’s also a few dollars cheaper than most of the “high-end” tier gloves in terms of price.

On a sidenote, I bought 2 pairs of the Official UFC Gloves just for when I decide to go to a future UFC event, I can get these babies signed.

Hope you guys liked the review. 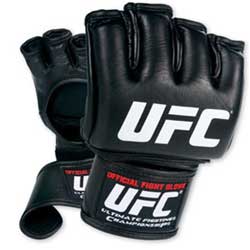