Check out the new Kanpeki Series from Hayabusa Fightwear! 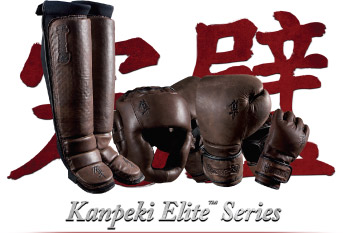 If you liked the Brown Boon gloves, or brown MMA gear and equipment in general, then you’ll love the Hayabusa Kanpeki Series.

Perfection is a word often used but truly attained – until now. One look says it all. Unrivaled performance. Master craftmanship. Immaculate quality. Years in the making. Hayabusa, is proud to introduce what will become the new pinnacle of professional MMA equipment with the release of the NEW Kenpeki Elite Series. No detail was overlooked in the creation of this flawlessly engineered line. fashioned with the most exquisite full grain leather, and modern tactical combat technology, each piece in this magnificent collection offers fighters unmatched functionality, durability and a distinctive classic elegance. This uncanny combination will truly re-define what it means to step into battle equipped for war. Prepare for the most anticipated MMA equipment line in history. Witness the perfect fusion of innovative design and ancient tradition. Get ready for the Hayabusa Kanpeki Elite Series – the true spirit of a fighter. Hayabusa is a UFC approved Sponsor.

Here’s what the Hayabusa Kanpeki Series will be composed of:

All of which should be available within the year. Maybe just in time for Christmas? We’ll see.

Keep it locked here on MMAGearGuide.net for updates on the Hayabusa Kanpeki Series.