The Hayabusa Hybrid MMA Gloves are all about versatility. Created with an exclusive extra thick Pro Complex™ Padding, these gloves provide maximum knuckle protection. With their ergonomically perfected design, expect a perfect fit and comfort unlike other regular Hybrid gloves. With the Dual Cross Directional closure system for superior wrist support these gloves are ideal for all MMA training. Hayabusa’s Hybrid gloves are constructed with 100% premium leather and finest quality lining, taking durability to a new level. 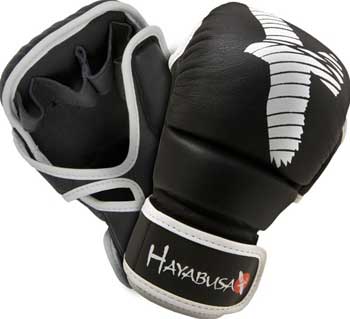 This is one of my latest purchases and I ordered these along with my Hayabusa Handwraps which I shall review at a later time.

Ordering: I ordered this from MMAFactory.co.uk and it was not my first purchase with Marc and the guys. They shipped out the order in time though there was an on-going strikes with Royal Mail then and it arrived a day late. No biggie. These gloves cost £39.99 with free shipping from them so converting into USD, it would come out as about $60.

First Impressions and Aesthetics: They came in a plastic bag and as part of my ritual after the initial “first glance inspections”, I tend to smell pieces of equipment just to “check”. (Like when you’re in a one night stand and you tend to.. nevermind) And yes, the gloves did smell of quality leather. The appearance is great as well. Both the pengerine falcon and the Hayabusa logo by the straps were all nicely screenprinted, there were no loose threads, the lining was perfect. (had to put emphasis on that since I’ve noticed the lining on the fingers of the Hayabusa 4oz gloves had a problem like this.) Least to say, I was impressed. Not to mention, they reminded me of the old-school Shooto gloves which is always a plus in my book. Upon closer inspection, I noticed that the padding on the gloves were a bit thin. I would later find out that looks can be decieving.

Construction: The tags neatly state that these gloves are made in China, and that the Material Content are as follows:

Premium Cowhide Leather: 70%, PU Complex, 10% and Foam Composite Patent Pending, 15% that all adds up to a staggering 95% and that’s left me thinking that I’m missing 5% of the glove and that should have warranted for a 5% discount.

But as stated, the construction is pretty good. No manufacturing flaws on their end whatsoever. (Except for the missing 5% of the glove. I JUST CAN’T GET OVER THIS.)

Fit: I ordered a size Small/Medium since if you’ve been an avid reader of our reviews, both operators of this site do have wrists of a 12-year old girl. They fit like a glove as expected; not too tight and not too loose and this is without handwraps. With 180″ wraps on, they can get a bit tight and might cut off circulation due to the Dual Cross Directional closure system and may actually cut circulation to your hand. Nothing too grave but it’s enough that one can feel it. This should be solved by using a shorter handwrap, leaning towards probably a 120″ MMA wrap.

Sparring and Pad Work: Yes, I know that these are just about 7oz gloves but I’ve been on both giving and recieving end of these gloves and let me tell you that it’s just right as long as you both aren’t going 100%. As mentioned earlier, the padding looks pretty thin even for a 70z glove but it does feel pretty safe both on my hands and my face. The wrist protection is pretty awesome as well and the thing does stay in place and I don’t have any complains for that. Though, with the thumb protection, I do have to use another grip when I need to grapple seeing as they get in the way though I expected that when I bought these things so I can’t say that I’m disappointed.

Also, considering that they’re 70z gloves, they’re pretty much the closest that you can get to as far as competition gloves go. You only need to adjust your timing a little bit more and you’re pretty much swinging a 4oz glove.

Cons:
Thumb support gets in way of grappling (but expected)
MISSING 5% OF THE GLOVE. COME ON HAYABUSA! WE LOVE YOU BUT.. 5%!
Could be a bit cheaper

Overall: I’d recommend these gloves as a pad/sparring glove especially if you’re training MMA. I’ve had these gloves for about 2 months now and they still look (and smell) pretty much like new. I’m giving these gloves a 4.75/5 since 5% of the glove is still mysteriously missing. (I kid, but really. 5%? Come on guys.)