Carlos “The Natural Born Killer” Condit endured a well-fought 5 rounder with bad boy Nick Diaz from the Cesar Gracie Camp. It was a battle of both endurance and amazing striking performance between the 2 fighters but the former emerged as the Interim Welterweight Champion of the UFC, earning the right to face Georges St-Pierre to unify the belts.

On his way to the Octagon, Carlos Condit sported the Headrush Carlos Condit UFC 143 Walkout Shirt, a 100% cotton athletic fit shirt that features the Headrush logo, an NBK text that stands for Natural Born Killer and a dagger graphic, completing one hell of a design for the potential future champion 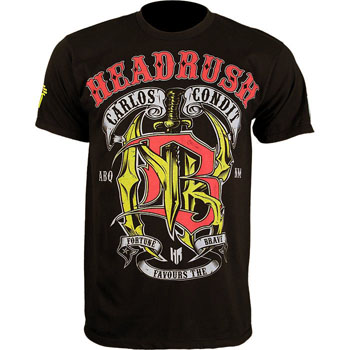