Check out the MMAGearGuide.net review of the most decorated MMA gloves in the world, the PunchTown KARPAL eX TAT2 MMA Gloves. 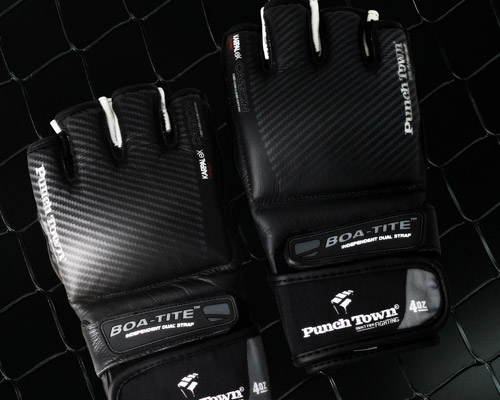 Before I start this review, I would like to apologise for the fact that I will be comparing these pair of gloves with the Hayabusa 4oz MMA Glove as they are the only other 4oz MMA gloves that I actually own and they are pretty similar with regards to the closure system.

First Impressions: These gloves came with a little carry pouch which is always a plus to keep it arranged. Wish more companies did this. As for the glove itself, there was no denying that these gloves were made out of genuine leather — nice and thick, compared to the PunchTown BXR Boxing Gloves. One thing that really stuck out was how stiff these gloves were out of the bag and how thin, or compressed the padding was. More on those details in just a bit.

Construction: It’s made with 100% cowhide leather, and there are no questions asked with regards to the leather as compared to the BXR Boxing Gloves. The leather is one of the most stiff that I’ve ever dealt with and do need at least 2-4 weeks break-in time. With this fact, I was pretty reassured about the quality and construction of the leather used with the glove so I was very pleased with that.

With regards to the aesthetics part of the glove, they look AND feel stellar. Wait, that doesn’t make sense.. or does it? I own the Carbon TAT2 MMA Gloves and the graphics are absolutely amazing. Photos don’t do it justice as far as the look goes, but wait until you actually FEEL the design. Words cannot describe it to be honest. Best part is that the design, or the Carbon in this case, is not just screenprinted, but it is literally tattooed on the glove so there is no issue of them coming off within the near or even distant future.

Fit: The PunchTown KARPAL eX TAT2 MMA Gloves fit really well. I’m a size S/M on the Hayabusa MMA Gloves and the medium is a perfect fit on these badboys. Though as mentioned, these gloves were initially pretty damn stiff, but I knew that once they were broken in, they feel on them would be perfect and I was right. The inner lining on these gloves is not so shabby either.

When I first read the description of the closure system, it immediately reminded me of the Hayabusa dual-directional closure system and it looked like it due to the photos, but both text and visual explanation don’t really do them justice. So I’m going to try to explain it as efficiently as I can. I might actually put a video up, but no promises, I’m on holiday as I write this.

Alright, so the Boa-Tite system is made of 2 components, the “mother” strap which is the bigger one and directly below it is the “child” strap, which is obviously the smaller one. The way you put the glove on is relatively simple, but it may take a bit of getting used to. You slip your hand is as normal, you take the “child” strap and adjust accordingly until you get a secure fit and then you follow with the “mother” strap afterwards. It’s really hard to describe, but one thing’s for certain, and I’ll even go as far as saying that these bad boys offer more wrist protection than the Hayabusa Pro MMA Gloves’ closure system. That’s pretty hard to top considering Hayabusa’s closure system is the closest thing you can get to lace-ups with Velcro, but you can tell that PunchTown has really put time and effort into their research and development to come up with this unique closure system.

Training: First and foremost, I would like to mention that if you are planning to use these in competition, allow 3-4 weeks break-in time for them to be comfortable. As far as training goes, I’ll be honest to say that I haven’t and most probably will never use these gloves on a heavy bag due to the fact that the padding is either just very thin or just pretty damn compact. I’ve used them on pads and (not too much) on sparring partners and I’ve got to be honest that it really felt good punching with these things, though I can’t say so much for my sparring partners. A friend of mine from another gym has mentioned that one of his sparring partners had the same gloves on and that they felt harder than any other 4oz glove that he has ever been punched with. Then again, I won’t go any further on using these during sparring as with any 4oz glove, they are pretty unsafe to go anywhere over just mere contact during actual live sparring. There’s seriously no point in injuring your hand or your sparring partners during training.

Though I would have to mention that during break-in period, I felt though as if I was punching with the area just right below my knuckles, but once fully broken in, the area that comes in contact with either pad or face does become anatomically correct so no problems there.

I’ve mentioned the stiff/compact padding a few times, but don’t be fooled as the inner lining is pretty comfortable. Not as soft and comfortable as the Hayabusa MMA Gloves, but just right below. That may be something that could be worked on, but it wasn’t really an issue for the time that I’ve owned these bad boys.

Overall: A great glove overall. Awesome Aesthetics. Innovative and unique closure system. Stiff padding works to your advantage during an actual fight while still being pretty damn comfy. Inner lining may use some work and is a bit more expensive than most MMA Gloves. I give these gloves an 8/10.