Yet another fresh design from Scramble, with the NO ATTACK GROIN T-Shirt.

The good old days.. yellow cards, stomping in the face, steroi.. YUP! PRIDE was the shiznit. Okay, I’ve never been that much of a funny guy but I know someone who is. Matthew, the guy from Scramble that made the shirt has this to say about the Scramble “NO ATTACK GROIN” T-Shirt. 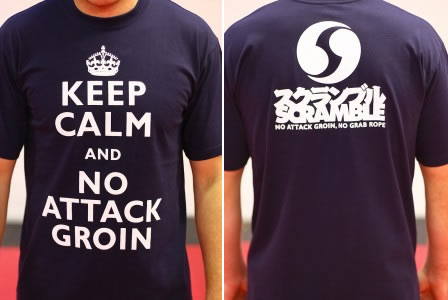 Combining two of my favourite things: Random British Jingoism, Janglish, and Getting Kicked in the Balls!

No wait, my three favourite things!

Anyway. This tee is inspired by the British stiff upper lip, and Yuji Shimada, Janglish-spurting Pride referee who started every match with those immortal words… “No elbow above neck. No attack groin. No grab rope. Crean fight, crean fight!”

They also feature the new Scramble logotype – the same that you can (hopefully!) see at the WEC on Maciej Jewtuszko’s shorts/banner, and Sengoku Raiden Championships 14 on Jeff Lawson’s shorts/banner. 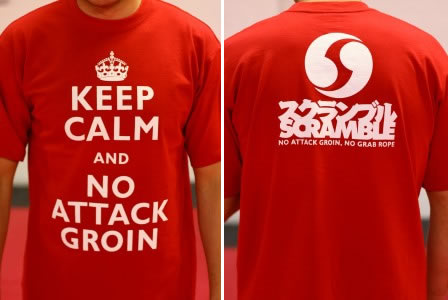