Mainstream MMA fans, aware yourself of one of the best lightweights in the sport today, Ben Henderson and his Dethrone UFC 144 Walkout Shirt!

Before to Anthony Pettis, Ben “Smooth” Henderson was the WEC Lightweight Champion but as he said in the UFC 144 Countdown show, “When I won that belt, I knew I wasn’t the best 155′er in the world.”, and now he has the opportunity for gold with the best organization for mixed-martial arts, the UFC.

He will be facing Frankie Edgar for the UFC Lightweight Championship Belt at UFC 144, at the Saitama Super Arena in Japan in the promotion’s first event back in the land of the rising sun since 2000.

“Smooth” will be sporting the Dethrone Ben Henderson UFC 144 Walkout Shirt on his way to the Octagon, which is a 60% cotton, 40% polyester crew neck athletic fit shirt so it’ll be perfect for training and casual use. 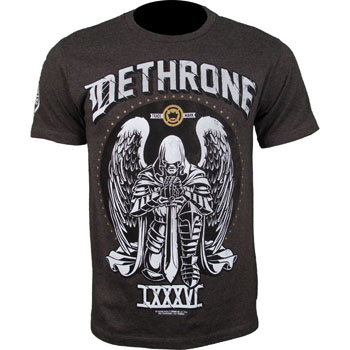