MMAGearGuide.net EXCLUSIVE! Check out the review of the MANTO Pro MMA Shorts in red as used by numerous fighters in KSW XIII including Mariusz Pudzianowski. 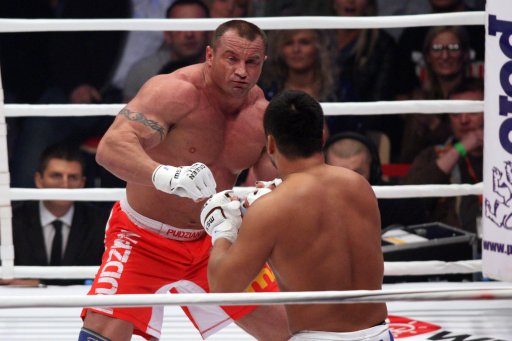 This particular model is not yet available in the market as of the 8th of May 2010 though it should be released to the general public relatively soon. For more MANTO products, you can visit www.mantofight.com or MMAWarehouse.com

First Impressions: These shorts deemed very appealing out of the bag. The red colour was very vibrant but still pretty minimalist, which can be generally said about MANTO’s products. There are a total of 3 logos on the outside, first off being the large MANTO grapplers on the left leg, a simple “manto” right smack in the middle of the waist, that doubles as a closure system and another MANTO logo in capital letters on the back of the right leg, giving you plenty of room for possible sponsor logos on the shorts. As mentioned, the design is pretty minimal which is more preferrable to some. Said logos are sublimated. Given my experience with sublimated textiles, I really don’t see them wearing off anytime soon, if at all. Another key point that I first noticed was how thin the fabric felt, more on that later.

Construction: These shorts are made from a very lightweight material and as stated in the label, it is 100% polyester. With that said, these are probably the lightest pair of shorts that I’ve ever worn in my life.  The crotch area is fitted with your standard stretch panel allowing the shorts to stretch where it counts when you pull a weird maneuver. There’s a mouthguard pocket on the inside of the left side of the waistband — so it may be a bit of a hassle to undo the closure system to stow away or claim your mouthguard.

Fit: The closure system is composed of 3 parts: the elastic waistband, the internal drawstring and the velcro closure in front and on the fly, giving you the best of all worlds. Manto sizing is pretty odd, as they go by the kilograms and not your usual Small, Medium, Large, XL, etc. Consult with the Manto sizing chart for your correct sizing but with that said, these things are true to size. The closure system does a pretty good job of giving the shorts a pretty damn nice fit.

Training: The MANTO Pro MMA shorts really felt great both standing up and on the ground. There was a bit bunching up whlist on the ground though it’s barely noticable — speaking of barely noticable, these things are so light that you can sometimes wonder if you’re wearing anything at all. I don’t really know if that’s a good or a bad thing but take it as you may.

These shorts offer unrestricted movement and there’s very minimal shifting horizontally, and none vertically — even if you’ve got pretty cheeky training partners pulling on your shorts at times.

Durability: At first, I kind of questioned the durability of these shorts as they used pretty thin material; but after months of use and abuse, (use them at least twice a week, only had 2 pairs in circulation really) they’re still pretty much good as new. The velcro’s holding up pretty well, the drawstrings are still in-tact and there virtually no loose threads that can’t be solved by a pair of scissors.

Overall: All-in-all, I would give these shorts a 4 out of 5 stars. I personally like my shorts to be a tad bit thicker but if you’re into thin material and lightweight shorts, these may just be the one of the best shorts you can use for training MMA. Manto is a very legit company especially with their rashguards and the same can be said about their shorts.

I apologise for the fact that the shorts are a bit creased in the photos. They are in perfect condition after a good wash.