Here we go! Korean Zombie up in this!

In case you didn’t know, Chan Sung Jung is a 10-2 MMA fighter from Korean Top Team. He took a one-way ticket into the mainstream with what’s called the “Fight of the Decade”, with Leonard Garcia in WEC 48: Aldo vs Faber which was Chan Sung’s WEC and United States debut which he lost in a very controversial split decision.

Since then, fans from all over the world have showed their utmost support for the 23-year old Korean Zombie. Even Dana White wore a Tri Coasta Korean Zombie Shirt (opens in a new window) at the UFC 113 weigh-ins in honour of Chan Sung Jung!

He may have lost the battle but he has sure won the war.

We are very honoured to have the Korean Zombie to do this interview with us and without further ado, here it is.

Q: First of all, congratulations for an outstanding WEC debut. How different is it fighting in the United States compared to Asia?

A: The big things are pretty much the same, but the little things are different. Food is one thing that I definitely noticed. I think the biggest difference that I noticed between fighting in the US and in Japan is that as long as I fight hard and put on a good performance, the fans seem to appreciate it more. Whereas in Japan, because I’m not Japanese and I wasn’t that well known, people didn’t really care about me a whole lot, even though I fought the exact same way that I did in my US debut.

Q: We’ve seen that you love to stand and bang but what people may not know is that you have won 6 of your 12 fights via submission. Personally, would you rather win via knock-out or submission?

A: Obviously, I prefer a knockout. However, if it’s a matter of winning or losing, obviously, I’ll take a submission win more often than not. After all, you don’t get more points for a knockout!

Q: From where/whom did the “Korean Zombie” monicker originate?

A: We take sparring very seriously at Korean Top Team. In fact, I think we spar harder than most real fights! The guys on the team just started calling my fighting style “zombie style” because I never get knocked down and I always move forward. The name stuck.

Q: What was your reaction when you saw/found out that Dana White was wearing a Korean Zombie shirt at the UFC 113 weigh-ins?

A: I was in the hospital at the time, as I had just had sinus surgery (deviated septum). So, I wasn’t in the best condition at the time, but when I saw it on the internet I was really surprised. At first, I wondered why he was wearing my shirt, but after the initial shock wore off, I was really happy and incredibly thankful. It caused a huge stir, as you probably know! 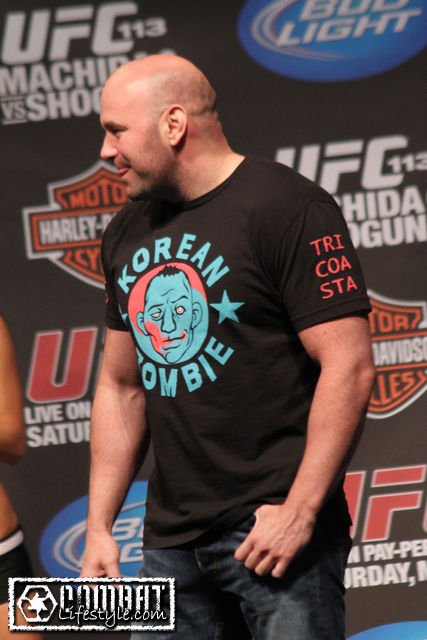 Q: You are sponsored by Isami, Sseda and Tri Coasta. What is it like working with each of them?

A: I have no complaints with any of my sponsors at all. Sseda is a safety equipment manufacturer, so they really have no stake in sponsoring MMA at all. They do it out of a love for the sport and they’ve sponsors on the Korean MMA scene for a long time. They sponsor our whole team. Isami mostly provides us with gear and equipment at the gym, so they outfit the whole team, as well. Tri-Coasta is my first US sponsor and they’re my first individual sponsor. They’re the ones responsible for the Korean Zombie t-shirt phenomenon. They’ve been great to work with and they’re putting together a deal to sponsor the whole team as well. In fact the response to the Korean Zombie t-shirt has been so great, we’ve got a whole line of clothing and gear in the works.

Q: What is the best brand of gloves that you have ever owned?

A: I think the gloves that they use at Sengoku are the most comfortable. The gloves that the WEC uses only covers the first knuckle of your fingers, but the Sengoku gloves come down one knuckle more (if that makes sense). I also just got some gloves from Combat Sports that I’m really liking.

Q: If you weren’t an MMA fighter, what would you probably be?

Q: When you’re not training, tell us what the Korean Zombie likes to do in his spare time.

A: I watch fight videos online, I cruise the MMA message boards, etc. I don’t really have a hobby other than fighting, so that is what occupies my time in some form or another.

Q: Give us a random fact about yourself.

A: I have over 500 hundred friends on Facebook, but I can only communicate with about 10 of them! LOL

Q: What is your favorite “cheat” food?

A: Brains, of course.

A: All three if possible, but if I had to choose one, I’ll take Arianny.

Q: If you were to give anyone who trains MMA one piece of advice, what would it be?

A: I’ve never been knocked out yet, and I don’t know if this why or not, but I recommend not closing your eyes when getting punched. Keep your eyes open and watch the punch all the way.

Q: Anything you’d like to say before we end this interview?

A: I’m thankful for the chance to do this interview and talk to all the readers of MMAGearGuide.net. I promise to keep fighting my hardest and always give you all exciting fights to watch.

We’d like to thank Chan Sung Jung and his management for making this interview possible. We’d like to wish him luck in his future fights even though we know that whatever the outcome is, he’ll never fail to disappoint. 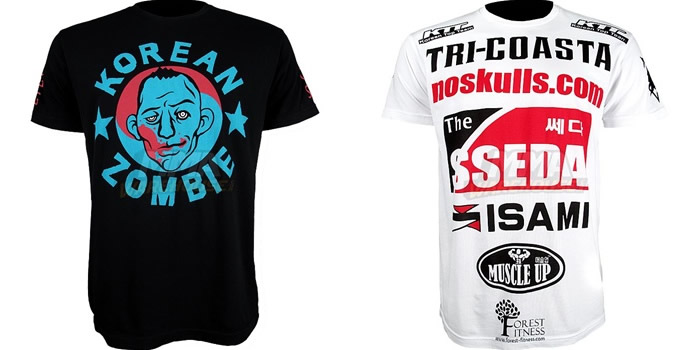